The Batavian Revolt with "To The Strongest" in 6mm


The Batavian Revolt with “To The Strongest“

The Year of Four Emperors and especially the events on the Rhine frontier, namely the Batavian Revolt, have been a particular research interest of our gaming group for quite some time. Once again it is one of the local topics in military history that we find so fascinating, the battlefields of AD 69 and 70 are very close to our homes (as a matter of fact, after the game we went out for a meal and could locate the battlelines of the final battle on a public city map).

One issue with wargaming the period has been so far to decide on the miniature scale and the ruleset, there are 28mm armies in the making but nothing definite had been decided. Until, well until Mad Dog came along and surprised us with a radically new approach: Why not use 6mm figures? They would be quick to paint and could form large, believable units. And while he was at it, why not try out a new ruleset? “To The Strongest” seemed to offer the interesting combination of playability and unconventional (at least for us) game mechanics.

We decided to give it a try and enjoy the spectacle of 6mm legions marching to battle in the forests of Germania, on a sunny Saturday afternoon. Here is what we experienced:

“To The Strongest” is different from other rules that we use by employing decks of playing cards in place of dice and that movement is organized by square fields, so rulers are not needed. The game is played in alternating bounds and units are organised in commands under their generals. Each player gets the chance to activate all commands during a turn, however, failure to activate a unit ends that respective command’s movements and actions. Activation of units and combat are decided by drawing cards from one’s hand and meeting a minimum numeral. Units can be activated for several actions per turn, but they must activate on a higher numeral than the one used for the previous activation. This creates a realistic feeling of “command attrition” as actions become progressively more difficult, while the cards are used up. Officers and special rules can provide opportunities to e-draw cards if necessary, but usually only once per turn. It is therefore an important part of the play to carefully consider the order of activations and actions in one’s army.

We used these army lists in the battles we played: 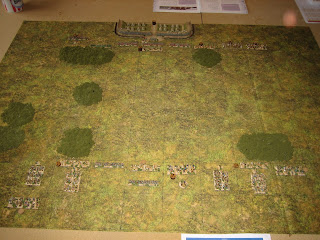 We used a 120 X 90cm playing surface, covered with a printed cloth showing a grid of 10 cm squares. Terrain was the Roman fortified marching camp and a number of woods. This was meant to represent a fairly generic Rhineland landscape.

Both games started with a general advance by the Germani against the Roman lines, who stayed on the defensive. The first time the terrain obstructed the movement of some Germanic warbands, who reached the Roman frontlines in a rather piecemeal fashion. This resulted in a rout of the Batavian army. After the game we went out for a meal and discussed the experience and mistakes that we had made.

Then we modified the Batavian set up and replayed the battle. The second game was very close and exciting, the Germanic Warbands reached the Roman lines en masse and, after being repulsed and having regrouped, managed to turn the left flank of the Roman line and push through towards the camp. The Batavian elite cavalry proved instrumental in securing the left flank of the Germani, where the Romans had managed to break through almost simultaneously with Germanic success on the other side of the battle line. 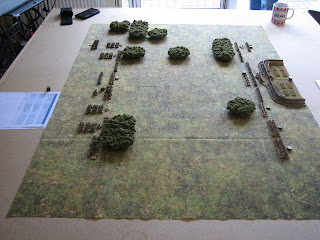 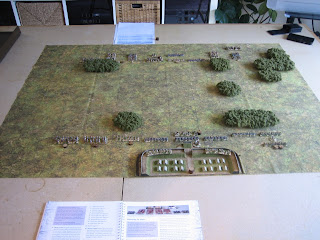 From the Roman side 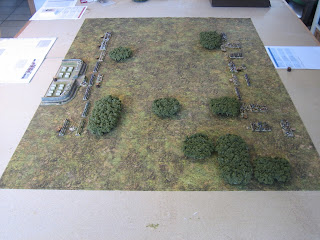 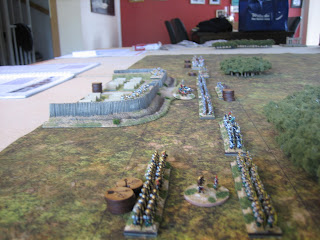 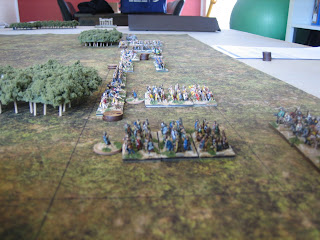 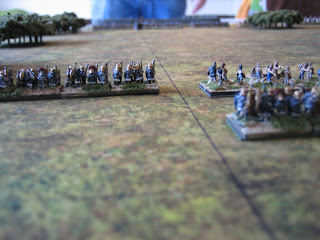 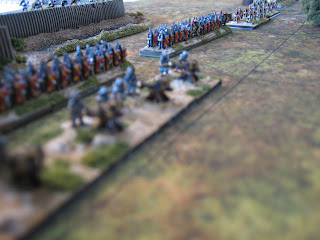 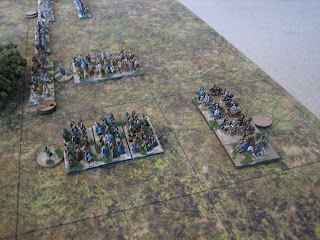 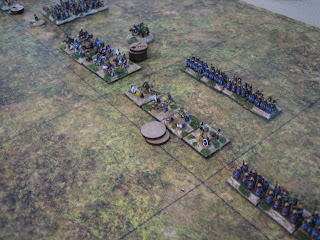 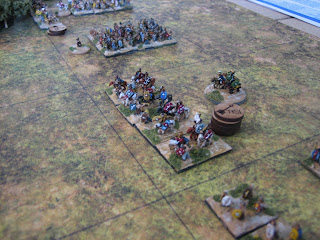 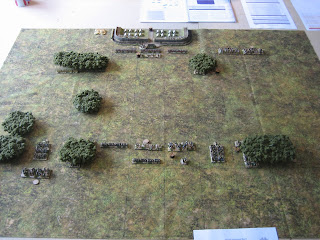 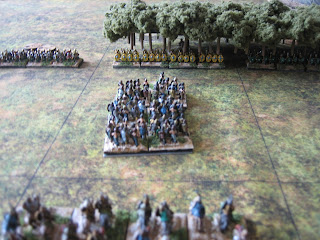 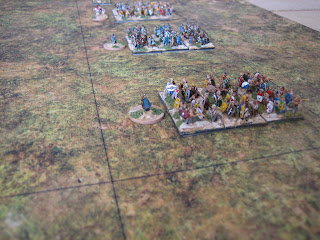 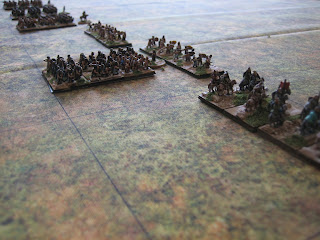 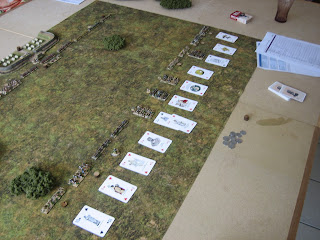 Representative view of game sequence with "Cards on the table" 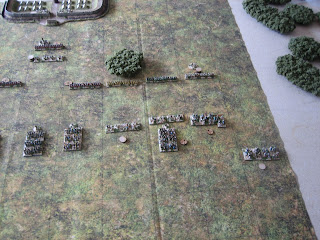 The Romans stand firm (yet) 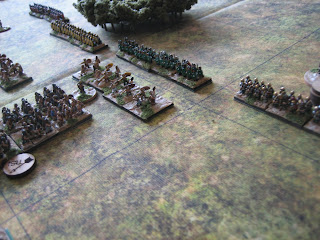 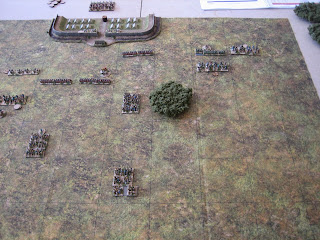 We found the second game to be a very realistic depiction of historical events, Roman legions (with their additional pila) and both Batavian elites (higher saving throw than legions) and even warbands (with “expendable” heros) all had convincing strengths and weaknesses but were, on the whole, evenly matched.

Shooting proved to be a moral factor (long range catapults inciting a quick advance by the enemy) but relatively indecisive in terms of casualties. Cavalry was extremely dangerous due to their mobility, but unable to achieve success head-on. Victory depended on legions, auxiliaries and warbands. We found this outcome very realistic.

The games were played very quickly, the first one took us less than 3 hours, the second one less than two.

The 6mm scale was visually very impressive on the table by enabling us to field large units with many figures; the number of miniatures per base was four times more than what is normally used on 15mm scale elements.

Altogether it was a very enjoyable and exciting gaming experience, many thanks to Mad Dog for two fair and nice games, as well as introducing me to a new set of rules. And, last but not least, I would like to express my admiration for his excellent painting of the small miniatures and great modelling skills shown in the manufacture of that camp and woods! Visually it was a spectacular game!

On 20th and 21st of October 2018 the annual German Team Championship for WRG 6th Edition will be held in Braubach near Koblenz.
Please use the contact form for further information.
International guests, newcomers and individual players are welcome.